In 1999, following a symposium held by the Tire and Rubber Association of Canada in which members of tire recycling agencies in Canada participated, a decision was made to formalize the association initially built on the success of monthly contact through conference calls.

From these simple beginnings the new organization CATRA (Canadian Association of Tire Recycling Agencies) was formed as a result of these early discussions. Membership included representation from all provinces in Canada which had tire programs and stemmed from the necessity of sharing information and ideas for the benefit of all Canadians and our natural environment.

“THE LEVEL OF COOPERATION AND COLLABORATION BETWEEN PROGRAMS ACROSS CANADA IS EXTRAORDINARY.”

Operations of the CATRA joint venture are guided by a Board which includes representation by member organizations across Canada.

The organization continues to evolve as a singular voice for both national and international tire related issues. 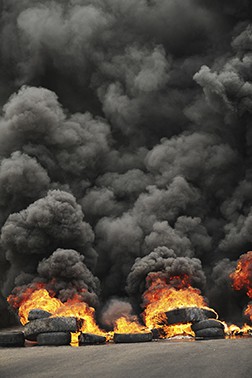 On Feb. 12, 1990 a huge pile of millions of scrap tires in Hagersville, Ontario caught fire and burned for 17 days spewing black smoke and toxic fumes in the air. Almost 2,000 people had to be evacuated and water wells in the area were contaminated. At the time, piles of scrap tires existed in almost every province in the country. The Hagersville fire acted as a wake-up call to Canada’s provincial governments alerting them of the potential for disaster in their own backyards and provided strong incentives for ensuring the proper management of scrap tires throughout Canada.

Tire Recycling Progress By CATRA and Members Since 1990