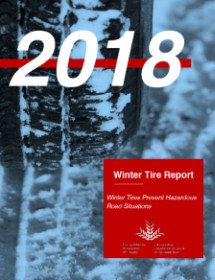 Eighty per cent of winter tire owners believe driving a vehicle equipped with winter tires has saved them from being involved in a potentially hazardous driving situation such as loss of control or a collision, according to a new consumer survey commissioned by the Tire and Rubber Association of Canada (TRAC).

“Canadian drivers who have embraced winter tires have spoken and provided this very telling insight,” says Glenn Maidment, President of TRAC. “They confirmed what we already know—that the superior performance of winter tires has a place in Canada, and that their greater grip and significantly shorter stopping distances on all cold-weather road surfaces keep Canadians safer on winter roads.”

Excluding Quebec, where winter tires are required by law, winter tire usage stands at 70 per cent. Last year’s study found 60 per cent of drivers were using winter tires outside Quebec.

This surge in winter tire usage is reflected in winter tire shipments across Canada, which have grown at an annualized rate of four per cent over the past five years. The significant increase in winter tire use is great news because it means our wintertime roadways are safer than ever as Canadians embrace the safety and performance advantages of winter tires.

The top motivations for purchasing winter tires, include: winter tire laws (34 per cent); advice from family and friends (17 per cent); lower auto insurance premiums (11 per cent), and positive media coverage (seven per cent).

“At 17 per cent, advice from family and friends represents a major driver when it comes to drivers switching to winter tires,” says Maidment. “So, we can effectively link the increases in winter tire utilisation directly with people sharing their positive experience with winter tires.”

The most common reasons why three-in-ten drivers still resist winter tires are the belief that all-season tires provide enough traction (53 per cent), cost (18 per cent) and reduced driving in winter (15 per cent).

The superior performance of winter tires is the result of advanced tread designs and rubber compounds. Winter tires feature softer tread compounds that retain flexibility even in extremely cold conditions. At temperatures at or below 7 degrees Celsius, the traction capabilities of winter tires provide greater grip on all cold-weather road surfaces and significantly shorter stopping distances.